Dear Journalists, AI is coming for your jobs

Repetitive journalism will soon get automated, leading to both increased productivity and job losses
Nov 03, 2019

The news industry has haemorrhaged jobs in the last decade. In the United States, the number of people employed in newsrooms declined by 25% from 2008 to 2018 — according to Pew’s analysis of the Bureau of Labor Statistics OES survey.

A potential reason for this could be automation. According to the New York Times, “Roughly a third of the content published by Bloomberg News uses some form of automated technology”.

The three paragraphs above were (mostly) written by a bot. They were unearthed and generated by AI that we created at Loki.ai. Given an input of “journalism layoffs automation”, the bot whipped these up in roughly 10 seconds. I did have to manually select a tweet from the 10 it identified (4 of which were unrelated), though.

Machines are better "churnalists" than humans

There will always be demand for humans that do great investigative reporting, nurture relationships with sources, or write well-argued analysis and opinion pieces. But–outside of elite institutions–this represents a tiny fraction of the work done by reporters. As Waseem Zakir of the BBC noted:

You get copy coming in on the wires and reporters churn it out, processing stuff and maybe adding the odd local quote. It’s affecting every newsroom in the country and reporters are becoming churnalists.”

Churnalism is not always a bad thing. When done well, churnalism involves repackaging facts into digestible graphics, adding relevant quotes, and presenting historical information to put facts in context. When done poorly, it reads like a 200-word article with little context and no informational value outside of the headline.

Here’s the deal — machines are infinitely better churnalists than humans are. And when replacing you, they don’t care if you are passionate about your craft, or if you’re a disgruntled intern on her last day of work.

Automating the news – what we (and others) are doing

We have spent most of the last 5 years in print, digital, and TV newsrooms in India. Last year, we created auto-updated dashboards and feeds for monitoring issues like industrial growth, and pollution.

More recently, we have created automated articles about the elections, economic indicators, and sports. By next year, we expect to be creating automated news videos (with human-sounding voiceovers).

This is hardly ground-breaking work. Automated Insights and Narrative Science, for instance, are companies that have been doing the same for nearly a decade. We are simply addressing a geographical market (India) where automation has not been widely applied. Soon, we’re sure that others will attempt to do the same.

As barriers to Artificial Intelligence adoption get lower, we believe that automation will continue to come to even more media arenas. Cricinfo currently has some fantastic articles describing the bat vs ball battles in Test cricket. But it’s not inconceivable to train an AI to take in the video feed of a cricket game and create similar articles.

Similarly, it’s not difficult to train an AI to listen to the live stream of a politician’s speech, analyze it for keywords, and summarize the speech. The AI can also put the speech in historical context faster than any human can — for instance, by tracking how mentions of a keyword have changed over time (as we did in the image below). 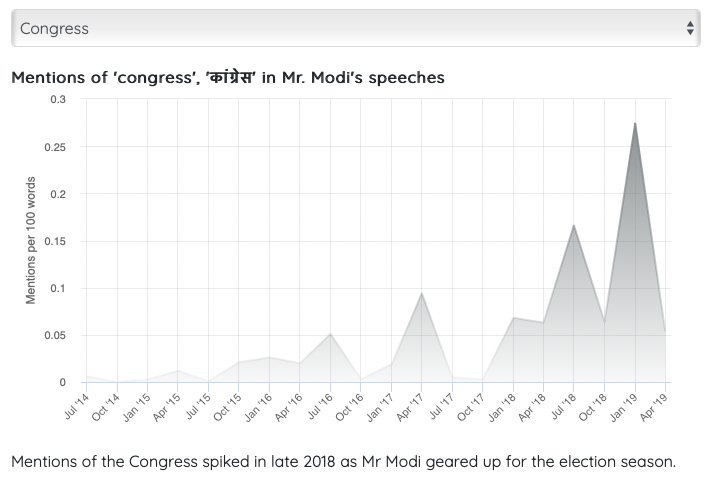 Isn't the threat of AI overblown?

Absolutely not. Until recently, bot-written articles relied on carefully written, formulaic templates. But with models like GPT-2, the ability of machines to generate natural language text has been super-charged. You can test this yourself by going to talktotransformer.com and letting it finish an article for you.

For instance, when given the prompt “Narendra Modi gave a speech about Kashmir.”, here is what the model came up with:

Narendra Modi gave a speech about Kashmir. He said “we will liberate the Indian state from the hands of the Pakistan-sponsored separatist groups”. This is also a clear reference to the Kashmiri separatists who are in the process of establishing an independent republic from India. In fact Modi said that “India will not exist without our people”. I have no problem with this statement. We are here to liberate India? Isn’t that what we are supposed to do, save the nation? I am sorry, you don’t get any room to criticize me, all you got to do is take this statement on face value. To me, there appears to be no problem with Modi’s words. You can also ask people what they would do differently if they were here in that room. As a Muslim Indian, I can tell you that I think this is a very reasonable, and even logical way of addressing a problem from the Muslim point of view.

It’s not the best prose, but these models will only get better over time. If you’re a journalist who specializes in numbers or in repackaging content, you should strongly consider adding other skills to your repertoire.

What can I do to future-proof myself?

If you do not want to #LearnToCode, here are some concrete steps (outside of becoming an investigative journalist) that you can take to make sure your skills remain relevant in the near future:

If you have questions around media automation, feedback about this post, or queries about how we do what we do, feel free to @ me on Twitter at @rishdotblog or send an email to rishabh@loki.ai.